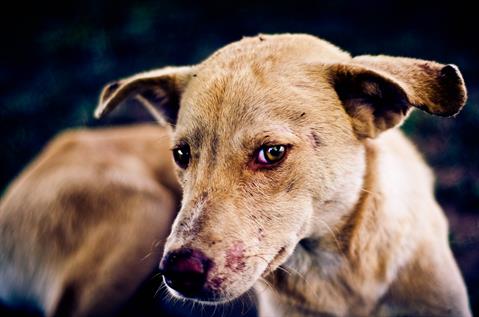 Rabies is a viral zoonotic disease of animals and humans, characterized by nervous signs of restlessness, excessive salivation, lack of coordination, urge to bite anything in sight, paralysis, and death. In humans, a notable sign is hydrophobia (fear of water) in individuals with a history of a dog bite. Rabies is caused by Lyssaviruses, with fruits bats believed to be their preferred reservoirs . Dogs are the most commonly infected animals, with transmission occurring after bat bites. Hence, infected dogs serve as the primary route (99%) of transmission of the virus to humans, although direct transmission through bat bites or scratches is also possible.

On entry, the virus is present in the saliva and brain of the infected animal and human. Hence, the transmission may also occur when the saliva from an infected individual touches the surface of an open wound or a mucous membrane.

Being one of the most fatal animal diseases of public health significance, rabies has attained global prominence and mention in global health and prevention programs. An OIE report posits that rabies is responsible for nearly up to 59,000 deaths annually worldwide.

This year’s World Rabies Day theme, “End Rabies: Collaborate, Vaccinate”, is a reminder for public involvement, cooperation, and continuous action towards achieving the WHO/OIE goal of achieving zero rabies by the year 2030. According to the “Global Strategic Plan to end human deaths from dog-mediated rabies by 2030“, the WHO/OIE outlined the period year 2018-2020 as the first phase of the plan, to strengthen capacity for eradication activities in countries where rabies is a priority disease (eg Nigeria).

Over the past decade in Nigeria, recurrent rabies prevention and control programs have been ongoing, with public and private sector awareness campaigns and vaccination initiatives on the rise. Currently, the animal health component of the World Bank-funded Regional Disease Surveillance Systems Enhancement (REDISSE) in Nigeria has rabies as one of its cardinal focal points, with rabies surveillance/control structures set up in different parts of the country.

However, the issue of stray dogs continues to be a major factor that can give the rabies virus a platform to continually thrive. By straying, they are exposed to the infection, and also better positioned for spread to humans. Other factors such as non-vaccination of dogs by owners, poor/low reporting of possible rabies cases, illiteracy, and rising crave for dog meat as a delicacy in many Nigerian communities, play a significant role in determining the success or failure of ongoing rabies control and eradication efforts.

What are our roles in combatting the spread of rabies?

Although rabies is fatal, it is still 100% preventable. Prevention is possible via four (4) major ways:

Together, We Can End Rabies!

Are you an animal health service provider in Nigeria? Get enlisted on the OHDI Directory of Animal Health and Welfare Services.

Having issues with your pet or need quality information and referrals to animal health service within your area? You can send a whatsapp message to 08055993123 to get all the information you need.