Is your Suya Safe to Eat? 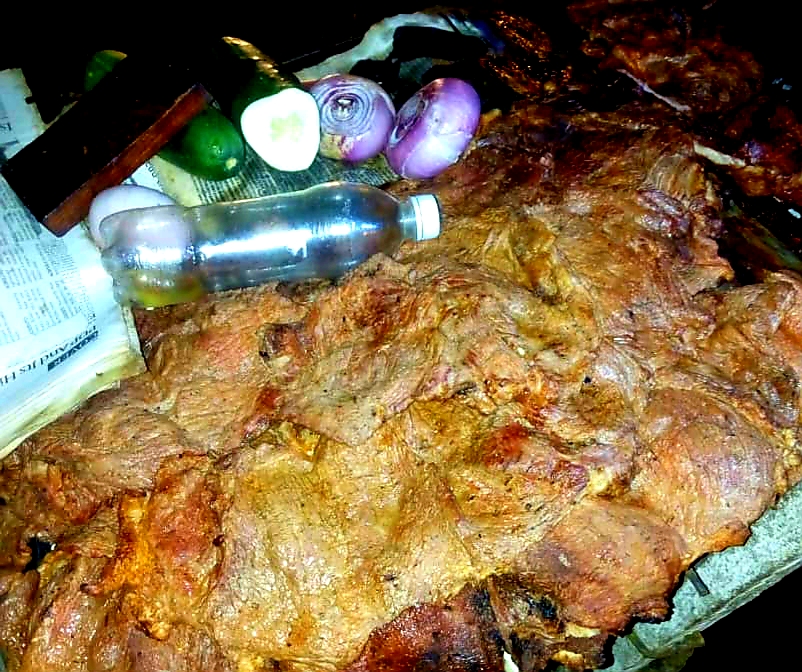 Spiced and skewered meat, locally known as “Suya” is a delicacy well-loved and enjoyed in Nigeria and parts of Africa. It can be made from several meat types including beef, ram (mutton), and even chicken parts. Generally, suya preparation and business are commonly considered as an exclusive preserve of indigenes of Northern Nigeria extraction, as well as surrounding countries like Chad, Niger, Cote D’Ivoire, Ghana, and the Benin Republic. Taken either as snacks or part of a meal, suya delicacy can found in most parts of Nigeria, even in remote locations. However, due to the often unhealthy practices and the environment in which suya is often prepared for human consumption; it has been observed that the meat delicacy poses public health risks for all who consume it.

More often than not, suya meat is displayed for sale on the roadside, open market, public motor parks, road junctions (sometimes near dirty gutters), and entrances to social recreation and relaxation centers. These are often exposed to flies and airborne contaminants such as microbes, soot, dust, and even liquid spills. When asked about this, Ayila Usman a suya vendor replied that he displays his suya at open places for the purpose of visibility, “so he can sell”. He also mentioned that he is bound to have more customers since many passers-by will be able to perceive the enticing aroma. Another vendor, who simply preferred to be called Mamora, said he carries his own “market” (goods) on his head or a wheelbarrow to specific junctions or places he has identified as customer hotspots. When asked whether the suya does not get cold, he replied that it does not really matter since he sometimes places a local lantern in the tray as a source of heat. Now, while it is important for any food vendor to seek the best ways to sell and market his/her goods, this begs the question – How can suya vendors sell their items without compromising food safety and quality?

Unsafe suya preparation and handling processes can predispose a consumer to foodborne diseases; chief amongst them include Salmonellosis or Typhoid Fever, and pathogenic E.coli infections. Both are characterized by vomiting, fever, body pains, and foul-smelling diarrhea. According to Nne Pepple (2017), pathogens such as E. coli and Salmonella were mostly found to be responsible for the death of foodborne illnesses in Nigeria. Other prevalent and often endemic food-borne diseases include cholera and worm infestations. Nne Pepple (2017) further states that many of these harmful food-borne bacteria, viruses, parasites, or chemical substances have also been linked to more than 200 diseases, ranging from diarrhea to cancers.

Poor food hygiene in suya may occur in several ways – this may include the preparation of suya from infected meat, handling of meat with contaminated hands or utensils, contaminated water, or poor environmental hygiene during the suya preparation and selling process. In certain places, it has been alleged that some butchers quickly slaughter dead animals (often dead from diseases) and convert their meat to suya, so as to curtail losses they would have incurred from the sudden death of their animals! When the meat is displayed openly on roadsides and junctions with heavy vehicular movements, dirt, dust flies, and microorganisms are bound to settle on them. Also, aromatic spices sprinkled on suya, when left overnight (in cases where they were unsold) and consumed the next day, constitute potential health hazards. It is also observed that the vegetables (cucumbers, onions, cabbages, etc) added to complement the suya delicacies are often unwashed. Additionally, the process of grilling, or pouring vegetable oils (saturated fats) on meat which roasting ensures that the oils drip into the fire while the smoke rises unto the meat, forming Polycyclic Aromatic Hydrocarbons (PAHs) in the process. These PAHs are one of the most prevalent causes of food-associated cancer.

According to the Global Food Safety Partnership (GFSP) report, Africa has the highest burden of foodborne diseases, with 91 million people getting sick and 137,000 people dying every year from foodborne diseases. In Nigeria, food-borne even though common is often under-estimated or under-reported. Adeyemi (2016) reports that though Nigeria is a country with over 170 million people, only about 90,000 cases of foodborne diseases is reported annually. This is because many people often seek self-treatment and only report when it becomes life-threatening. The good news, however, is that most meat borne diseases can be avoided by proper hygienic handing and heating. So, the next time you stop over to buy your favorite suya delicacy, ensure you do so at points where the coal fire is burning, and that you closely supervise the re-heating process. Prevent the vendor from pouring vegetable oils while re-heating, and courteously ask for the vegetables to be thoroughly washed before slicing and addition. Also, in every situation, avoid buying overnight suya. While these measures can only be taken based on individual choice, it is highly pertinent for the Nigerian government to establish a functional food safety and quality control system that will ensure that local food vendors including suya sellers follow the best hygienic practices. The reinforcements of such laws and practices will go a long way in ensuring food hygiene and preventing food-borne illnesses for the general populace.

Lastly, join the crusade for food safety by reporting any cases of people slaughtering of sick or dead animals in your vicinity for suya or any meat-derived local delicacy. This is very critical to your health and safety and for public health.

One thought on “Is your Suya Safe to Eat?”