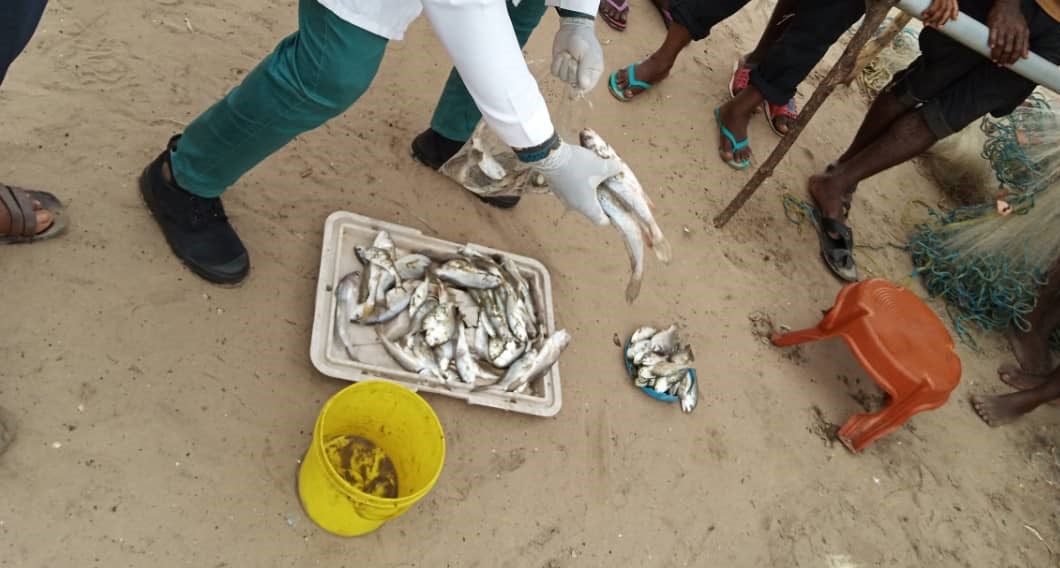 Since late March 2020, residents of coastal communities on Akwa Ibom and Rivers State have been waking up daily to find dead fish and crabs on their seashore. Media reports, including BBC News Pidgin, have confirmed the sightings of thousands of dead fish being washed ashore and found along the river banks of many communities in Rivers, Akwa-Ibom, Ondo, and Bayelsa States – all of which are coastal states in Nigeria. These occurrences are reportedly happening on a daily basis, raising a cause for concern and a matrix of looming implications for public health, food security, livelihoods, and biodiversity in Nigeria.

On receiving the alert in Akwa Ibom, the state Director of Veterinary Services, Dr. Obot Obot set-up and dispatched a 4-man team of veterinary surveillance officers led by Dr. Enyekeme Samuel to visit the coastline areas for proper investigation. They met some of the community members who already packed dead fishes in trays with the intention to process and sell in the neighboring fish markets. Though they were initially apprehensive, the intervention of the community heads made them more relaxed and more open to a conversation. They mentioned that they never paid much importance to the dead fish or the species affected as they saw it as an act of nature, hence reasons why they still collect the dead fishes to process and sell to their customers for consumption. They also included that since there was little to no live fish for them to sell, that was the only way they could sustain their income.

The team proceeded further in their personal investigation and preliminary findings showed that the dead species of aquatic life encountered the most were the croaker fish (Micropogonias undulatus) and the crab (Brachyura spp), as they found these littered on the Atlantic coastlines.

​Dr. Enyekeme Samuel mentioned that with the incessant human activities on the water bodies in the area (including crude oil exploration, fishing expeditions, etc), he highly suspects that toxicity is responsible for the deaths of aquatic life that are being observed. This position was equally shared by Professor Olufemi Adedeji, an expert in Aquatic Veterinary Epidemiology and Toxicology at the University of Ibadan, Nigeria.

In his reaction, Prof Adedeji explained that sudden death in fish or other aquatic life in unconfined environments like the ocean is often a pointer to underlying causes that tamper with the water quality, leading to toxicity. Aquatic toxicity is often caused by the presence of contaminants (also called pollutants) in water bodies, such as heavy metals, microorganisms, antibiotic residues, industrial effluents, microplastics, hydrocarbons, etc. They may be naturally-occurring, but most often occur as a result of anthropological human activities such as industrial waste disposal, mining, crude oil exploration, and other activities. Water pollutants cause impaired water quality which leads to suffocation of fish and other marine animals including both animals and plants due to the reduction in dissolved oxygen levels (DO), which eventually results in death. As at the time of this report, fish, crab, and water samples have been sent to National Veterinary Research Institute (NVRI) at Vom in Plateau State for evaluation of pollutants and related causes of death. However, results are yet to be confirmed.

The presence of dead fish and other aquatic life in the communities have grave implications on the public health of humans, land and aquatic animals in the community and their environment. They also constitute a serious threat to sustainable livelihoods of Nigerians (especially in the affected communities) and might have long-term effects on food security, environmental sustainability and biodiversity. This is explained further below as follows;

First of all, it is important to emphasize that the issue of fish and other aquatic life ending up dead on water shores is extremely unnatural and even deadly, and should never be ascribed to natural causes. The death of fish and other aquatic life should be regarded as a sentinel – which is a sign of a situation where the death or illness of animals and plants in our environment should indicate the presence of an ongoing disease, pollution, or unhealthy practices in the environment or human populations. Needless to say, sentinels like this needs to be addressed immediately.  In this case, the postulated cause of water toxicity is already affecting all plants, animals, and human life (though at unknown varying degrees), but which may subsequently exhibit as illnesses and disease conditions in the communities later. A classic example is a similar occurrence that happened in Northern Nigeria in 2010 as reported by the Center for Disease Control (CDC) (2016). Ducks were mysteriously disappearing or found dead in certain communities in Zamfara and no one thought it was important at the time. Suddenly, there was an outbreak of an equally mysterious illness which led to the death of hundreds of children in the community and alerted public health officials. Investigations revealed that an ongoing unsafe mining practice by community residents had led to high levels of lead exposure leading to lead poisoning and death in the children. It is important to note that children are more vulnerable to lead poisoning than adults. According to the World Health Organization (2019), this is because children absorb 4–5 times as much ingested lead as adults mostly due to their age-appropriate hand-to-mouth behavior. So, the investigative team in the Zamfara communities eventually found dangerous levels of lead in the children’s blood and unsafe levels of lead inside most of the community homes and in the water from their wells. The CDC mentions that the death of the ducks were sentinels (warning signs) indicating a severe environmental hazard that could have alerted authorities of the lead poisoning crisis earlier. Keeping this example in mind, and the fact that community fishermen are still gathering the dead fish for processing, purchase, and consumption by the majority of Nigerians who find fish as a major source of protein and a delicacy, the long-term public/community health implications on humans (and animals) are ominous and mitigating actions must be taken urgently.

The death of aquatic life also constitutes threats to socioeconomic sources of livelihood and food security – both of which are key inter-related factors for sustainable development.  With the death of aquatic life and the perpetuation of water toxicity in our coastal rivers, the fishermen who depend on fishing and related activities as their source of livelihood are already on the brink of unemployment. It is important to note that most of the rural communities are already considered marginalized and of low socioeconomic status. Therefore, the plausible desperation for survival will continue to drive them to collect and sell dead fishes to consumers, thereby spreading the toxic component that is killing the fishes to humans. The toxic fishes also pose risks to animal health, since most raw fish and similar ingredients (e.g., fish meal) are used as protein components in compounding livestock and poultry feeds. Ingestion of the toxic components by the livestock animals may result illness and death of animals, leading to economic losses for livestock farmers.

Water Pollution (or any pollution at all) leads to a loss of biodiversity as it destroys and/or inhibits the growth of all plant and animal aquatic life leaving the water bodies desolate and unable to accommodate life. According to Nature Trust, polluted streams prevent spawning (procreation) of fish and other aquatic life, leading to their reduction in populations. Furthermore, top predators of aquatic food chains indirectly ingest the toxic chemicals, thereby disrupting predator-prey interactions. For example, when water pollutants directly impact smaller aquatic species such as fish, crabs, and prawns, the bigger aquatic species which consume the smaller aquatic species in normal predator-prey interactions gradually accumulates the pollutants in their body systems causing long-term effects ill-health or death – another loss to biodiversity. In another instance, the death of smaller species killed by water toxicity starves the bigger aquatic species of food and at best, they have to migrate widely to search for food and survive or die.

A Call to Action

This situation calls for the urgent attention and action of all stakeholders including public health officials, veterinarians, environmentalists, toxicologists, aquaculturists, and researchers in both private and public sectors and agencies. It requires a holistic solution that will immediately confirm and address the source of the pollution and death of fishes, mitigate and contain the effects, halt the sale of dead dishes to Nigerian consumers (while proffering alternative sources of income for the fishermen). This solution will require an approach that will coordinate all stakeholders in this matrix of events to control the situation. In the upcoming second article in this series, we shall discuss in detail practical recommendations to solving the issue of dead fish on Nigeria shores and ensuring this public health emergency never happens again.

Which Pet Animal is your favorite?

Apply for the WARC Travel Grant for African Scholars

Apply for the THRIVE Accelerator Program for AgriFood Startups