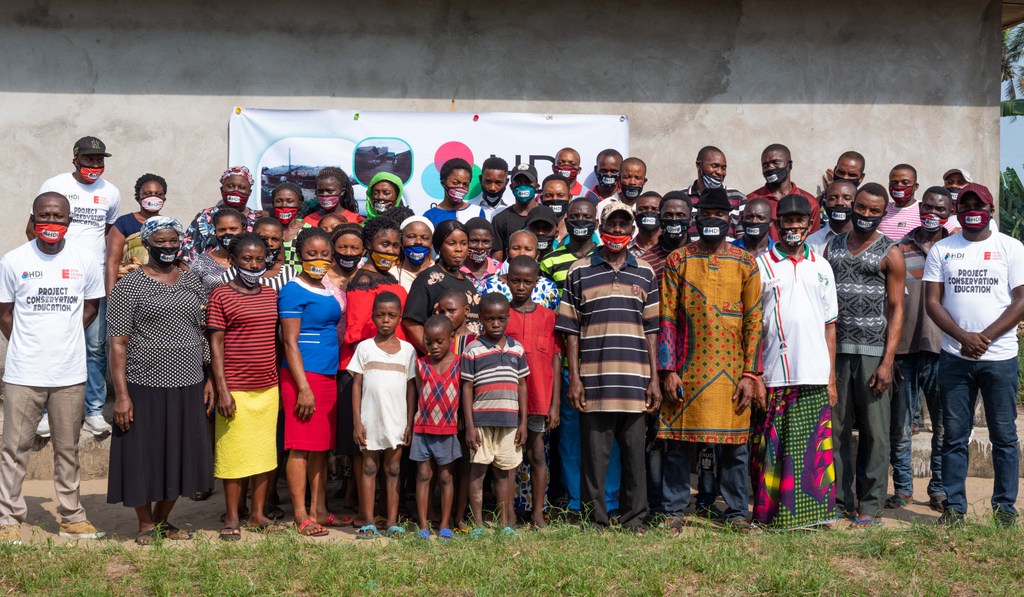 From 11th to 12th February, the OHDI Team culminated all their previous community engagement activities into a community-based training program which was attended by a total of 106 community members. The team, led by the Project Lead, Dr. Samuel Akpan utilized the newly-developed OHDI Conservation Education Training Manual to engage them on their conservation and environmental issues and One Health, answer all questions, and inspire them to take collective action on solving issues raised.

Just before the scheduled training start time of 12:00PM, the village town crier was mobilized to announce the arrival of the OHDI training team, and in response, community residents filtered in to the designated town hall venue. All participants were accredited at the entrance to the training venue, made to use hand sanitizers, and given facemasks to wear before entry into the hall – as part of COVID19 prevention measures.

After basic introduction of the team members and re-introduction of the project, the pre-test survey questionnaires were shared out for participants to fill and return. The use of pre-test is to ascertain participants’ base knowledge, beliefs, perceptions and practices on conservation and environmental management. Thereafter the training commenced.

Using the Conservation Education Training Manual for Niger-Delta coastal communities developed by OHDI, four (4) main topics were discussed and these include;

At the end of each topic, the floor was thrown open for the participants to ask questions, or state their concerns on the subject matter. The questions were duly attended to by the training facilitator, who ensured it was also highly interactive.

Responding to the Lesson 1 (Marine Ecosystems/Oceans and Biodiversity), Mr Mfon Sambo Jonathan, a fisherman, asked if the mangroves are peculiar to the Iwuopom Opolom environment. To this, the facilitator answered that the mangroves are self-erupted growths which span the length and breathe of the entire Niger-Delta coastal areas – some of which have totally disappeared due to pollution. The facilitator further asked the participants to name other benefits of the marine ecosystem apart from thise stated in the manual, to which Helen Wilfred and Ubong Udofot mentioned that it serves for boat regatta during their annual festival, as well as source of livelihood for local who use their boats for transportation of humans and market wares.

On Lesson 2 (Marine Pollution and other Threats), a large percentage of participants responded that oil spillage on the ocean is the main source of pollution of their environment. They were additionally informed that asides oil pollution, plastic pollution is a significant threat to the existence of aquatic life in the ocean and could lead to (for instance), fish suffocation and death. Mr Eno-oto Peter,a fisherman agreed that he has once seen fish circling and gasping for breath close to the ocean surface, only for him to find out that it had gotten entangled in a transparent nylon bag in the ocean. The participants were then educated on the dangers of throwing water satchets and other plastics into the ocean, and they unanimously agreed that they would make efforts to desist from such actions in the future.

On Lesson 3 (Introduction to relevant Sustainable and Resource Conservation practices), the facilitator spoke on sustainable fishing practices and encouraged the use of fish gears which allow for the escape of immature fish. The fishermen stated that though their fish gears do not allow such, they sometimes practice the “catch, sort and drop” method while still on the waters, but they would work on improving their methods. The facilitator mentioned that one sure way of conserving and ensuring that sea animals do not go extinct is to return them to the ocean when caught. This was followed by a brief period of silence, and then laughter by few participants. When asked the reason for the laughter, Douglas Stephen noted that for as long as they can recall, they eat any sea creature they catch – small or large. To this the facilitator discouraged them, explained further reasons why sea creatures should not be slaughtered for consumption or game and explained the need and benefits of biodiversity in our oceans.

Lesson 4 (on Environmental Management) also elicited robust interactions, with questions/concerns raised by the participants on waste management which they considered a major challenge in the Iwuopom Opolom. A female participant, Charity Etop asked the facilitator to specifically give her an alternative to dumping of refuse into the water bodies, or burning of the refuse openly, since burning is also said to cause land and air pollution. Responding to this, the training facilitator used the opportunity to request the village council to assemble a task force on waste management, to see how wastes can be collected, or how residents can be discouraged from dumping refuse on the shorelines. It was unanimously agreed that the task force is needed, and the village council agreed to assemble a team to that effect. The community secretary appealed for waste baskets/bins to be provided and placed at strategic points round the community, a step he said he saw when he visited some suburbs previously. To this the facilitator agreed to escalate their request to appropriate authorities for action.

After the training, post-test survey questionnaires were shared out, to ascertain the level of knowledge and understanding of the training. It was also agreed that in subsequent meetings, the OHDI team will support the community in nominating members of a taskforce committee who will monitor adherence to conservation and environmental practices agreed by the community members themselves.

Also, in due time, OHDI will launch and publish the Conservation Education Training Manual as an open-resource that can be used to scale-up this training to other coastal communities in the Niger-Delta Region. We recognize and appreciate the British Ecological Society for the support provided to implement Project Conservation Education.

BREAKING: University of Guelph Launches a first-of-its-kind Bachelor of One Health Degree Program