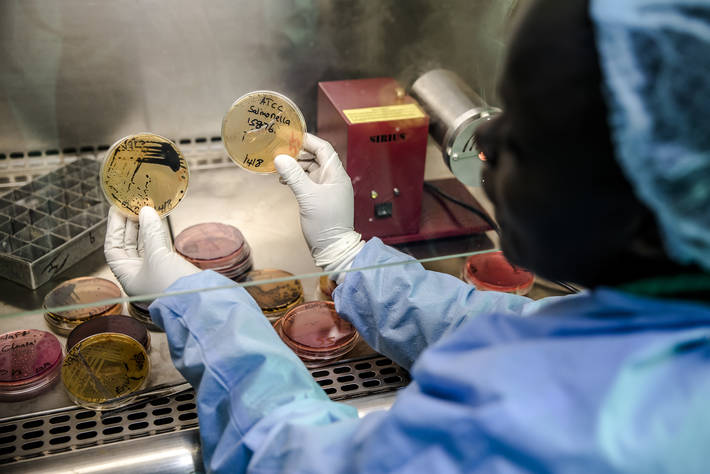 The heads of the Food and Agriculture Organization of the United Nations (FAO), the World Organisation for Animal Health (OIE) and World Health Organization (WHO) today launched a new One Health Global Leaders Group on Antimicrobial Resistance (AMR).

Group members include heads of government, government ministers, leaders from the private sector and civil society. The group is co-chaired by Mia Mottley, Prime Minister of Barbados, and Sheikh Hasina Wazed, Prime Minister of Bangladesh. The full list of members of the One Health Global Leaders Group is available here.

The new group will harness the leadership and influence of these world-renowned figures to catalyze global attention and action to preserve antimicrobial medicines and avert the disastrous consequences of antimicrobial resistance.

The Tripartite organizations launched the group during World Antimicrobial Awareness Week 2020 (18-24 November), as part of their shared call for united action to preserve and protect antimicrobial medicines. The group was created in response to a recommendation from the Interagency Coordination Group on Antimicrobial Resistance and supported by Secretary-General of the United Nations.

The Directors-General of FAO, OIE and WHO described the rapid rise of drug resistance as one of the world’s most urgent threats to human, animal and environmental health – endangering food security, international trade, economic development and undermining progress towards the Sustainable Development Goals (SDGs).

A common agenda across human, animal and plant health

“During the COVID-19 crisis, we must not forget that AMR is a ‘slow motion’ pandemic, with significant long-term threats to global public health and food security, which needs multi-stakeholders engagement,” FAO Director-General QU Dongyu said at a press conference today calling on all stakeholders, including international organizations, private sectors and civil society to double their efforts and strengthen partnerships towards achieving “One World, One Health and One Planet we are living on”.

Preventing the most severe outcomes of drug resistance

Antimicrobial resistance is making many infections harder to treat worldwide. WHO’s latest reporting shows that the world is running out of effective treatments for several common infections.

“Antimicrobial resistance is one of the greatest health challenges of this generation, and we absolutely cannot leave it for the next generation to solve,” said Tedros Adhanom Ghebreyesus, Director-General of the World Health Organization. “Now is the time to forge new, cross-sector partnerships that will protect the medicines we have and revitalize the pipeline for new ones.”

The One Health Global Leaders Group will provide political leadership and elevate the need to prioritize best practices to address antimicrobial resistance at global, regional, and national levels. And it will advise and advocate for the development and implementation of polices and legislation to govern the importation, manufacture, distribution and use of quality antimicrobial drugs across all sectors.

“Antimicrobial resistance is a current problem affecting animal health, human health, and the environment, we need to act today to protect their efficacy,” said Monique Eloit, Director-General of OIE. “I am confident that this group will advocate powerfully to implement legislation and mobilize key stakeholders to change antimicrobial use practices to protect our collective health and welfare.”

More information on the work of the Tripartite (FAO/OIE/WHO) is available here.