What do you know about “Fuku Elegusi”? 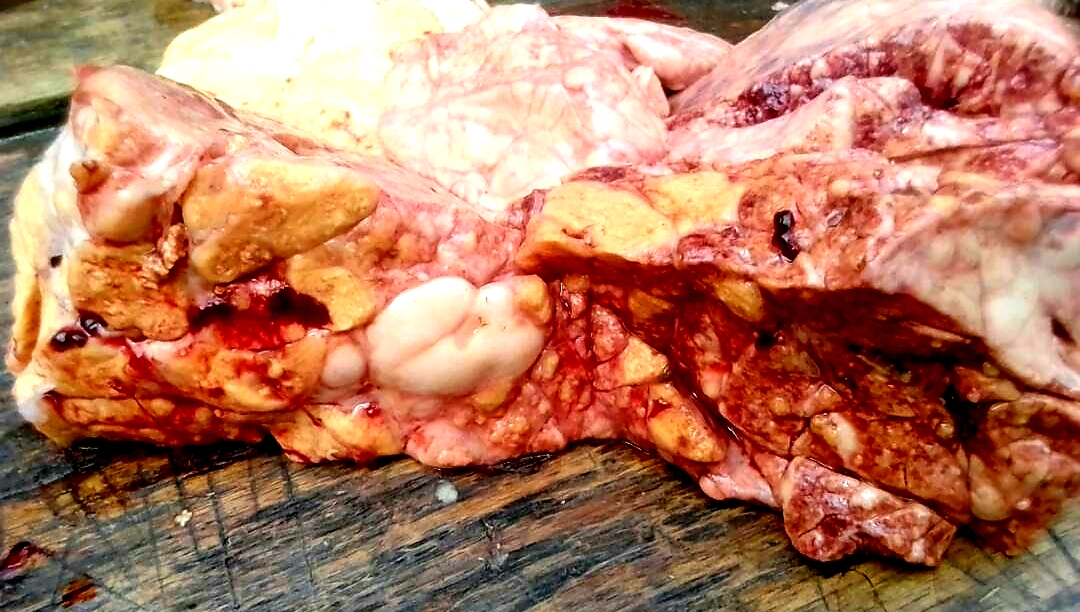 Have you ever been to the market to buy beef, inu eran (offal), or specifically, fuku (lung)? And you were not convinced that you were getting a good bargain because of the fuku’s physical appearance? Did the fuku have some dark to grayish, yellowish, or white areas of elevations with some of them protruding out of the surface of the fuku itself? And then the eleran (meat seller), in a bid to convince you that the meat was safe, cuts a little piece of it and the pops into his/her mouth to chew? Or maybe you just love the feel of “strong, crunchy” fuku that you can chew like a biscuit and that will last longer in your mouth like chewing gum?

Yes! Then you know what this is about. We are describing Fuku Elegusi!

A lot of people from the Yoruba tribe in south-western Nigeria would instantly recognize the common phrase Fuku Elegusi. This would especially be familiar for those who live in or frequently visit rural and peri-urban meat sellers in large rural markets as it is commonly sold among beef and inu eran sellers. It is even considered a delicacy for some meat sellers and consumers as it is said to “last longer in the mouth” as opposed to the normal lung that has a shorter chewing time due to its softer spongy consistency. Recognizing this preference, some butchers attract their customers telling them that “the meat is fuku elegusi”.

However, Fuku Elegusi, is a great health hazard for those who come in contact with it, chew it, purchase it, and cook for consumption. In fact, in countries with standardized and strictly monitored abattoir management systems, the animal from which such fuku was harvested from should be slaughtered and completely destroyed.

But let’s come back to our reality here.

What is Fuku elegusi in the real health terms?

It is important to note that Tuberculosis (TB) is still a disease of high global priority due to its high prevalence and incidence worldwide, especially in sub-Saharan Africa. Also, the disease is common as a co-infection in people living with HIV and those with low body immunity. Data from the Global Tuberculosis Report (2019) by the World Health Organization (WHO) reflect that in 2018, Africa ranked second in the number of TB cases with an estimated total TB incidence of over 2.4 million and Nigeria is one of the top 20 countries with a high burden of TB. According to TB Facts (2020), It is estimated that 407,000 people in Nigeria have TB each year, while an additional estimated 63,000 HIV positive people equally get TB each year. This is similar to Nigeria’s TB incidence rates in 2018 as reported by the Global Tuberculosis Report (2019). The report stated that in 2018 only, there was an estimated TB incidence of 429,000 with an estimated mortality of 125,000, while TB incidence among HIV-positive people was 53,000 with an estimated mortality of 32,000. Now, the percentage of those who contract Bovine TB (TB from cattle that produces our meat) is largely unknown or underestimated, even with some studies attributing to be about 5–7% of all human TB cases in the region. However, it is key to note that Bovine TB and Human TB (TB transmitted between humans) have the same clinical signs and manifestation. Once tuberculosis infection is established in the body of an animal or human, it spreads to sites and organs in the body such as include lungs, liver, kidney, and intestines.

In her peer-reviewed research article on Predictors of Bovine TB Risk Behaviour amongst Meat Handlers in Nigeria, Dupe Hambolu corroborates the high risk, customary behavior of eating Fuku Elegusi amongst meat handlers and she interviewed butchers in Oko-Oba Abattoir in Lagos State. She found out that almost a quarter of the study participants actively ate Fuku Elegusi and more than 70% of the study participants did not know that eating Fuku Elegusi could be a source of Bovine TB in humans. It is important to note here that Lagos is one of the most urban and commercial cities in Nigeria. Therefore, there is a possibility that these unhealthy practices of consuming Fuku Elegusi occur even more commonly as a norm in the other less urban and rural parts of the country.

In light of the identified health risks, we must pay attention to meat/food safety and take active measures to stop the practice of selling, buying, and consuming offals and meat products from cattle and other animals infected with tuberculosis (or any other infectious disease). It is also high time we garner all stakeholders at government and community levels to establish systems and policies that will improve the management of our abattoirs and ensure even adherence to abattoir rules and regulations. We must also educate our friends, families, and communities on the health risks and dangers of consuming TB-infected meat products. This includes even educating your favorite butcher and meat sellers in the market. Also, we must all ensure that as we buy meat products in the markets for our consumption, we are thoroughly examining the meat and offal (inu eran). You can examine meat products by using your senses of touch, sight, and smell. If you are not comfortable with the appearance of any food animal product including any change in color, smell, and/or size that seems abnormal, DON’T BUY IT, no matter the amount of pressure mounted or ‘marketing skills’ of the seller.

Together, let us stop risky unhealthy practices and achieve a healthier lifestyle for ourselves.