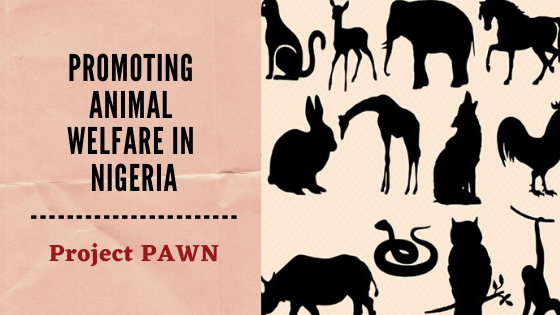 Animal Welfare is described as the holistic health and well-being of all non-human animals. The American Veterinary Medical Association (AVMA) refers to Animal Welfare as the state of an animal and humane consideration for animal well-being, including proper housing, management, nutrition, disease prevention and treatment, responsible care, humane handling, and, when necessary, humane euthanasia. It is also reiterated that “an animal is in a good state of welfare if it is healthy, comfortable, well-nourished, safe, able to express innate behavior, and if it is not suffering from unpleasant states such as pain, fear, and distress”.

In Nigeria, Animal Welfare is almost non-existent as there is a lack of appreciation for animals and a general apathy or indifference towards animal health and welfare. The welfare of animals including pets and companion animals, livestock and food animals, laboratory animals, and wildlife are generally not considered to be worthy of special care neither are they prioritized in the scheme of healthcare. This has led to the perpetuation of animal abuse and neglect without caution, and lack of a functional legislative framework that can curtail such acts of animal abuse, and ensure holistic animal welfare protocols are adhered to. Existing laws are outdated, ineffective, and/or are hardly known or enforced. Furthermore, there is little awareness, orientation, and public education on animal welfare and preservation of animal life which benefits not only animal health but also human health, environmental health, and sustainability.

There are several types and levels of animal abuse commonly observed in the country and these include physical violence such as flogging, striking, kicking and slapping, neglect of food and water causing starvation, prolonged caging, improper housing environments, illegal capture and consumption of wildlife, violent butchering of animals, etc.

Lack of animal care and welfare has several consequences that are not limited to the animals also, but by extension, has repercussions on our own human and ecosystem health. It is important to note that our human, animal, and environmental health are connected in an intricate One Health triad, such that the poor health one of the triads results from and/or affects the other triads of health. Lack of animal welfare leads to the low quality of life for animals which will result in several issues. These include poor animal health, increased human vulnerability to zoonotic diseases, food insecurity, and poor human nutrition of the large population of humans that still depend on animal-based diets. Also, lack of animal welfare and care leads to dwindling biodiversity especially for wildlife animals and this has a profound effect on environmental sustainability and climate change. Furthermore, poor animal welfare and perpetuation of animal abuse demonstrates a lack of empathy and inhumane behavior in humans. In fact, it is believed that perpetrators and occurrences of animal abuse are often linked to the concurrent perpetuation of human abuse in the same vicinity.

With the above-listed consequences of poor animal health and welfare, it becomes important for stakeholders to promote public education and advocate for a progressive and functional legislative framework that will promote animal welfare in Nigeria.

Project PAWN will be implemented through 3 main strategies including utilizing media and communications for public education and advocacy, stakeholder movement-building, and policy influencing.

Soon, we would begin the implementation of Project PAWN. Kindly follow our updates by subscribing to our newsletter or following our social media platforms.

Are you interested in this project? Would you like to contribute time and/or resources to advance the goals of the project? Kindly contact us or send an email to info@onehealthdev.org.