Foot and Mouth Disease (FMD) in Nigeria: Current Realities and the Way Forward 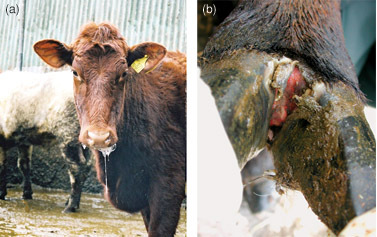 Foot and Mouth Disease (FMD) is a highly infectious viral disease of wild and domestic cloven-hoofed animals such as cattle, pigs, sheep, goats, and buffalos. It is characterized by fever, drooling of saliva, and appearance of ruptured blisters on the muzzle, mouth, mammary teats and feet. FMD is widespread in Asia, Africa, and parts of the Middle East. The disease is known to comprise about seven (7) groups of viruses, which makes it particularly difficult for one particular vaccine to be effective in prevention. Interestingly, the disease does not often cause highly mortalities. Rather, it leads to high morbidity, impacting negatively on normal production and the general well-being of the animal. Also, in rare cases, the disease affects human health.

FMD is a Transboundary Animal Disease (TAD), notifiable by the World Organization for Animal Health (OIE). TADs are epidemic livestock diseases that are highly contagious or transmissible and have the potential for very rapid spread, irrespective of national borders, causing serious socio-economic and possibly public health consequences. Therefore, all countries with verified cases of TADs such as FMD are excluded from International Animal Trade. Sadly, Nigeria falls into that category and this has invariably led to a great loss of revenue from the livestock sector, the poor livelihood of livestock farmers and a decline in the value of our animals and animal products. Despite these sanctions on our international animal trade, little has been done to improve the situation and the virus is still prevalent in significantly high numbers of cattle passing into the country through our land borders, especially through the Northwestern parts of Nigeria.

In Nigeria, the first documented outbreak of FMD was in 1924, and since then the disease has remained endemic, with four known serotypes subsequently circulating within the country. Although some level of success in managing the disease on farms has been recorded through the utilization of chemical debriding therapy, symptomatic treatment, and pastoralist set-ups using ethnoveterinary knowledge, total control and eradication of the disease have largely remained a mirage. It is common for the local herdsmen to seek self-help medication (herbs) to treat the disease in their animals. Also, though some farmers seek the expertise of veterinary personnel, others practice the concept called Dashse which is a practice characterized by guarded prognosis due to the absence of cross-immunity amongst serotypes.

In 2011, the Federal Government instituted a Competitive Agricultural Research Grants (CARGS) project, to encourage indigenous research and serotyping of the FMD virus prevalent in Nigeria and those entering the country from neighboring countries via international animal trade; with a view to establishing local FMD vaccine production. Though a laudable effort, this achieved a little measure of success. Challenges to this and other efforts at complete eradication of the disease include the following;

To successfully control and prevent Foot and Mouth Disease (FMD), Nigeria must learn from her own success stories such as the eradication of Rinderpest disease and containment of avian influenza. We must take a holistic approach and involve all relevant stakeholders including relevant MDAs and policymakers, animal health personnel, livestock farmers and community stakeholders in ensuring the control and eradication of FMD. This will include massive herders/farmer awareness, a more efficient FMD research support, mass vaccination, strict border quarantine measures, ranching of animals, and active and consistent surveillance and monitoring for at least a 10-year period. Also, it is high time that Nigeria starts to utilize the massive socioeconomic opportunities that is available for the livestock industry in the international animal trade sector. This is only possible when we ensure that the Transboundary Animal Diseases (TADs) which make our animals and animal products condemnable are eradicated completely in the country.

The Impact of Stress on Animal and Human Health