Addax Antelopes on the Brink of Extinction 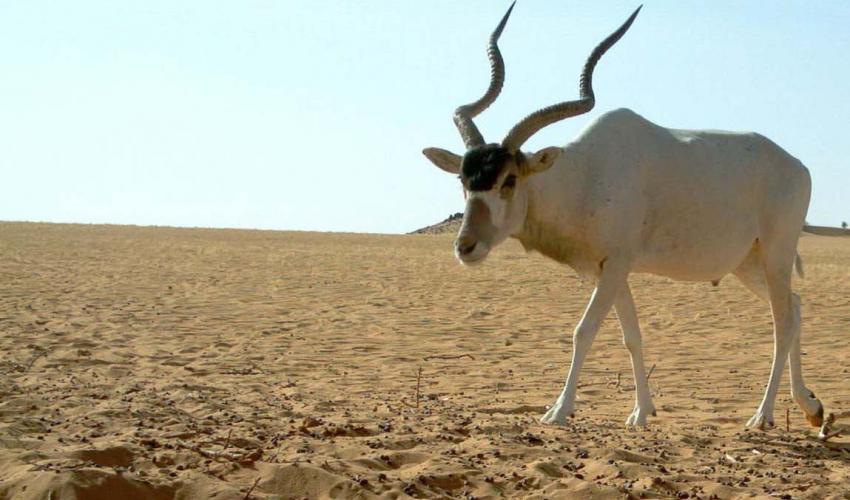 The Addax Antelope is an animal that lives in the Sahara Desert and is popularly known as the “White Antelope”. They were abundant throughout most of the Sahara, but recently they have been greatly reduced due to extreme hunting and poaching by man. IUCN  listed the species as critically endangered in the wild in 2010, and surveys have suggested that there are only 200 remaining. Addax has a unique feature of long spiral horns possessed by both the male and female species and hooves that are broad with flat soles, which stop them from sinking into the desert sand.

According to World Atlas, Addax Antelopes are characterized by long, twisted horns and pale coat color, which lends it the name of white antelope. There are white markings on their face, ears, belly, hips, and legs, and there is a black tuft of hair on their forehead. The horns on both males and females are typically 30 to 43 inches (76 to 109 cm) with 1.5 to 3 spiral twists. Male Addax Antelopes usually weigh between 220 to 300 lbs, while the female weighs about 10-20% percent lighter.

Addax is naturally adapted to the desert’s harsh conditions, can sustain itself without water for indefinite periods, and can survive in stony environments. They are native to Mauritania, Chad, and Niger but may be seen in other extremely arid conditions and in regions with less than 100 mm of rainfall in a year. Addaxes are social animals that live in nomadic herds with bout 5- 20 members constituting each herd. Males are very territorial and take up the task of safeguarding the females. The herd leader is usually the oldest female and she often leads the herd to the places with the best vegetation. Addaxes are not nocturnal but during the hottest times of the year, they will sleep during the day and forage at night. This is also useful in helping them avoid predators.

Addaxes are herbivores feeding on grasses and leaves of desert plants while obtaining water from their food and dew.  They only pass out waste products in dry feces and concentrated urine because they utilize every bit of water they feed on.

The greatest threat to Addax is man, who hunts them without limits or supervision. Hunting (by both residents and tourists) has greatly contributed to the reduction and elimination of Addax Antelope populations in their habitat. They are an easy catch for humans with modern weapons because they are broadly-built slow-running antelopes. They are also often chased and this predisposes them to death by exhaustion. Other activities like regional insecurity and the oil industry activities have wiped out large populations of this animal. Factors like droughts and desertification of savanna lands have also contributed to the reduction in their populations.

Currently, conservation groups like the International Union for the Conservation of Nature and the Sahara Conservation Fund are working with Niger Republic’s government to save these species. For example, in 2012, the Niger Republic opened the Termit & Tin Toumma National Nature Reserve to protect the Addax and other wildlife. Without immediate intervention, Addax will lose its battle for survival in the face of illegal, unrestricted poaching and the loss of its habitat.

In conclusion, the level of disturbance and illegal killing of these white antelopes place them closer to extinction. There is an urgent need for coordinated action at all levels; otherwise, we may witness their demise.  Effective cooperation with the wildlife authorities and sensitive practices in protecting protected areas is essential. Also, attitude towards the sharing of sightings of these animals with conservationists should be encouraged.

The Impact of Stress on Animal and Human Health

Webinar Report – One Health approach to Ocean Conservation in Nigeria